Have You Ever Burnt Toast?

Of course you haven’t, but if one day that happens, you will have tried pyrolysis without even realizing it!

Pyrolysis is the process of heating biomass in the absence of oxygen*, such as leaving something in the oven for a little too long. Because the definition is so broad, there are several different types of pyrolysis methods. Before we get to our overview, can you guess which type of pyrolysis IRSI’s Ulysses uses?

*with oxygen the biomass would combust!

Traditional
The process of pyrolysis is nothing new; ancient farmers throughout the world, most notably in the Amazon, have been using this technique to help increase soil fertility by creating biochar. Ancient Amazonian people would take agricultural byproducts, such as crop residue and place it in a hole in the ground. They would then begin to pyrolyze the biomass, after covering the hole with earth and strategically placed vents to prevent oxygen from entering. European explorers were so impressed with the fertility of the soil, they began studying terra preta (biochar) as early as the 14th century. 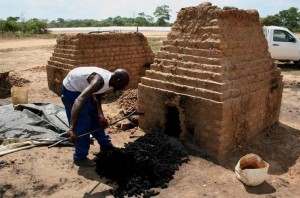 Technology has advanced quite a bit since the days of ancient Amazon farming. More methods have become developed and are being refined as we speak. This is the second generation of pyrolysis.

Fast
With fast pyrolysis the time the biomass is being pyrolyzed is about 1-2 seconds at about 600C ! A uniform feedstock with a low moisture content is placed through the pyrolysis machine and the output are primarily a syngas or bio-oil, which if done correctly can be used as a fuel replacement!

Slow
Slow pyrolysis units tolerate a greater variation in size of feedstock which may make the unit more versatile than fast pyrolysis counterparts. Depending on the size of the unit the duration in time can run from a minute to an hour at 500C! The output of the slow pyrolysis process are all three states: solid (char; which is the primary output), liquid (bio-oil), and gas (syngas).

So now that you have learned about a few pyrolysis methods, which one do you think IRSI’s Ulysses is?

If you guessed slow pyrolysis, you’re right! The Ulysses 1.0 is a 60 ft long unit- it takes biomass about an hour to run through our system. Just like your oven at home (and all those pinterest fail baked good casualties) the Ulysses is similar to a big oven, except that the end goal in fact is to create char.

If you have any questions about pyrolysis or the Ulysses, feel free to email us at info@irsi-inc.com!